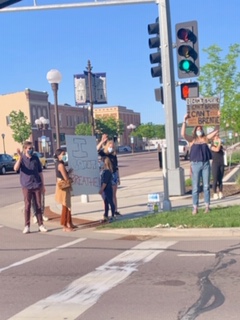 Peaceful demonstrators protesting the death of George Floyd gathered at the Center and Broadway in New Ulm Saturday. The protest began at 3:30 p.m. and grew to over a dozen people. The protest was not organized by any group. Individuals began gathering at the intersection throughout the afternoon. Protestor Emma Nelson said her main hope to come out of the protest was police would stop killing unarmed black men. Nelson said there were some businesses worried the protest would attract violence. One man driving past yelled at the protestors to “go home” because the protest would “bring chaos.” Nelson gave assurance the participants were non-violent and had no intention of looting or burning buildings as had been seen in the Twin Cities and other American cities over the last few days.